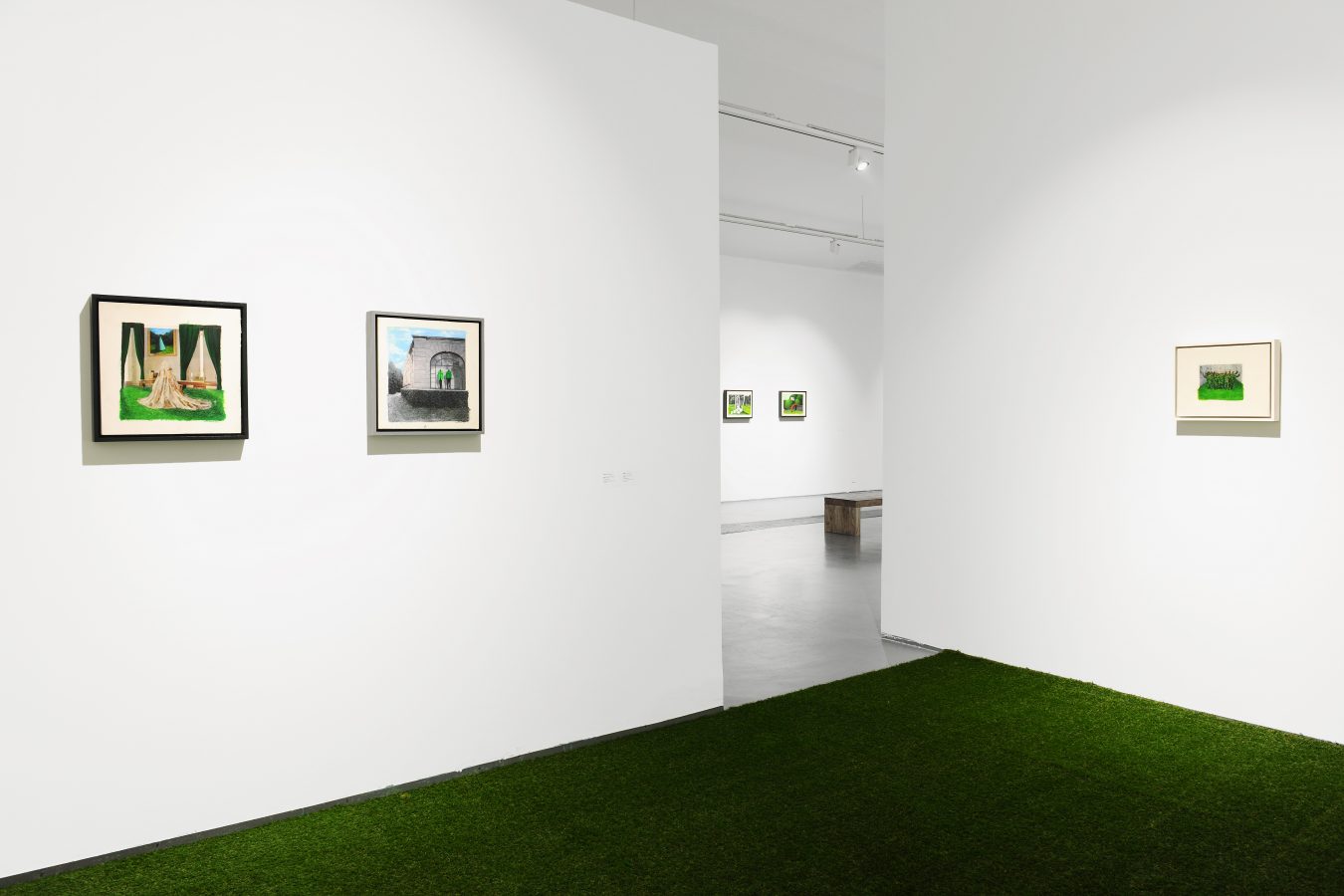 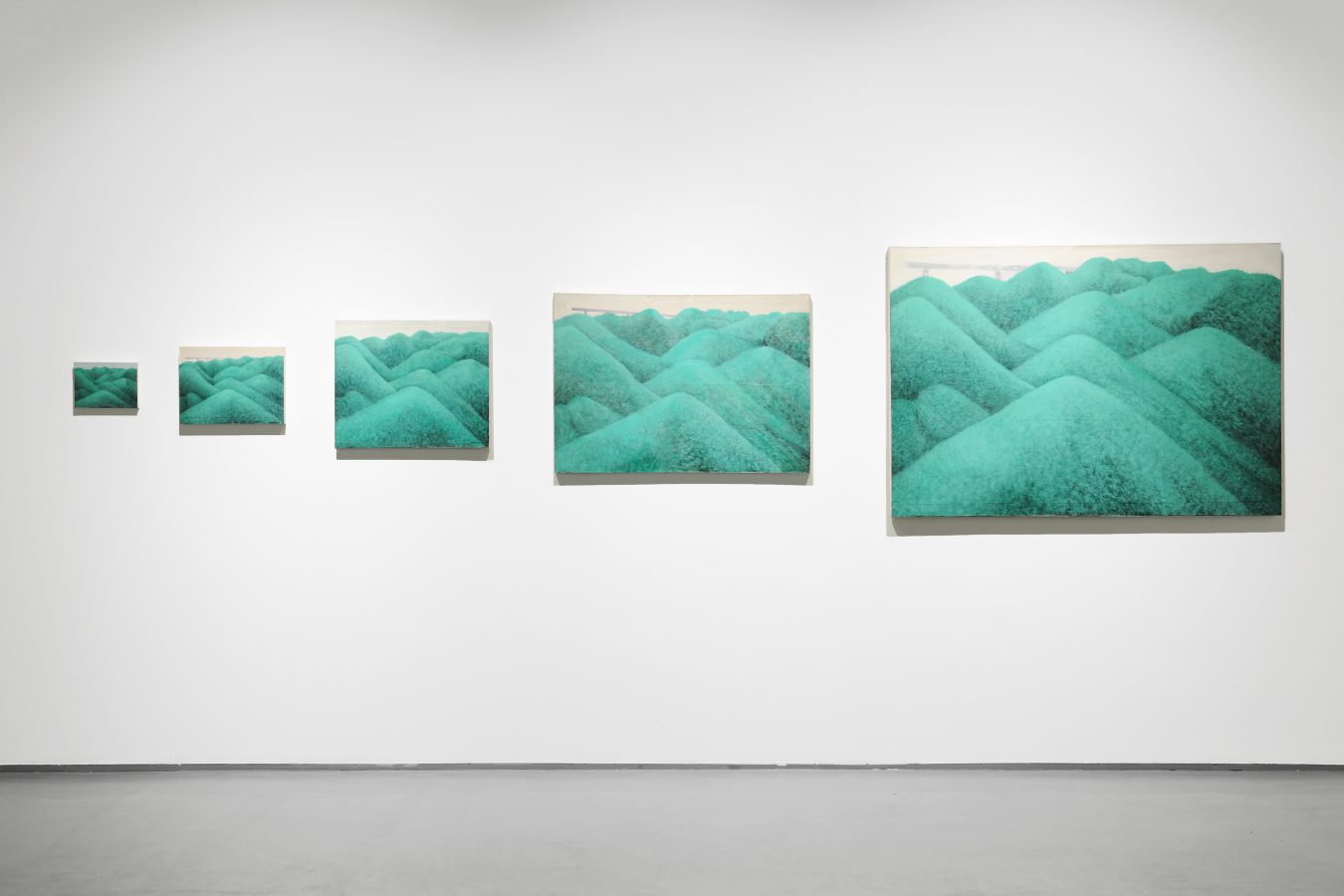 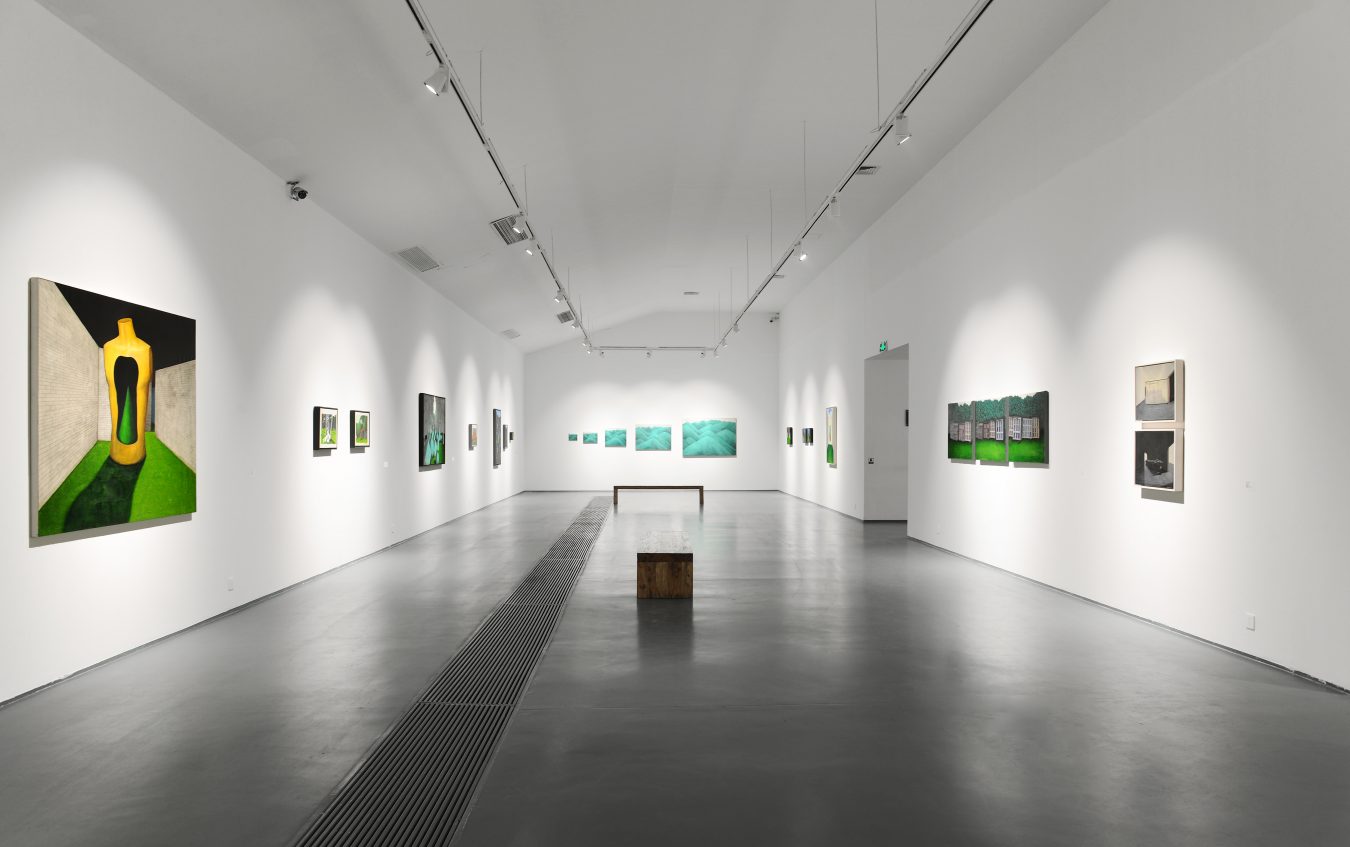 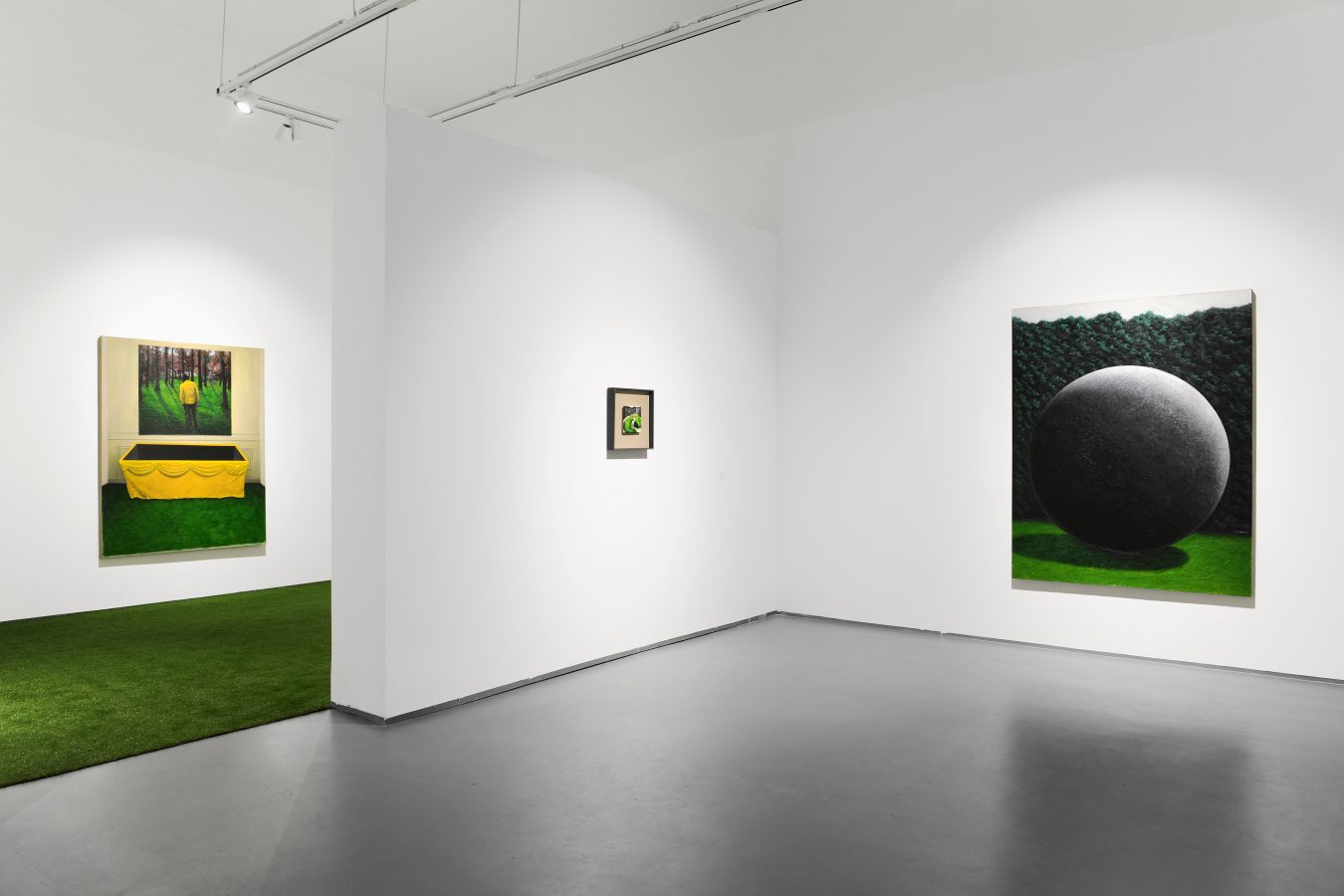 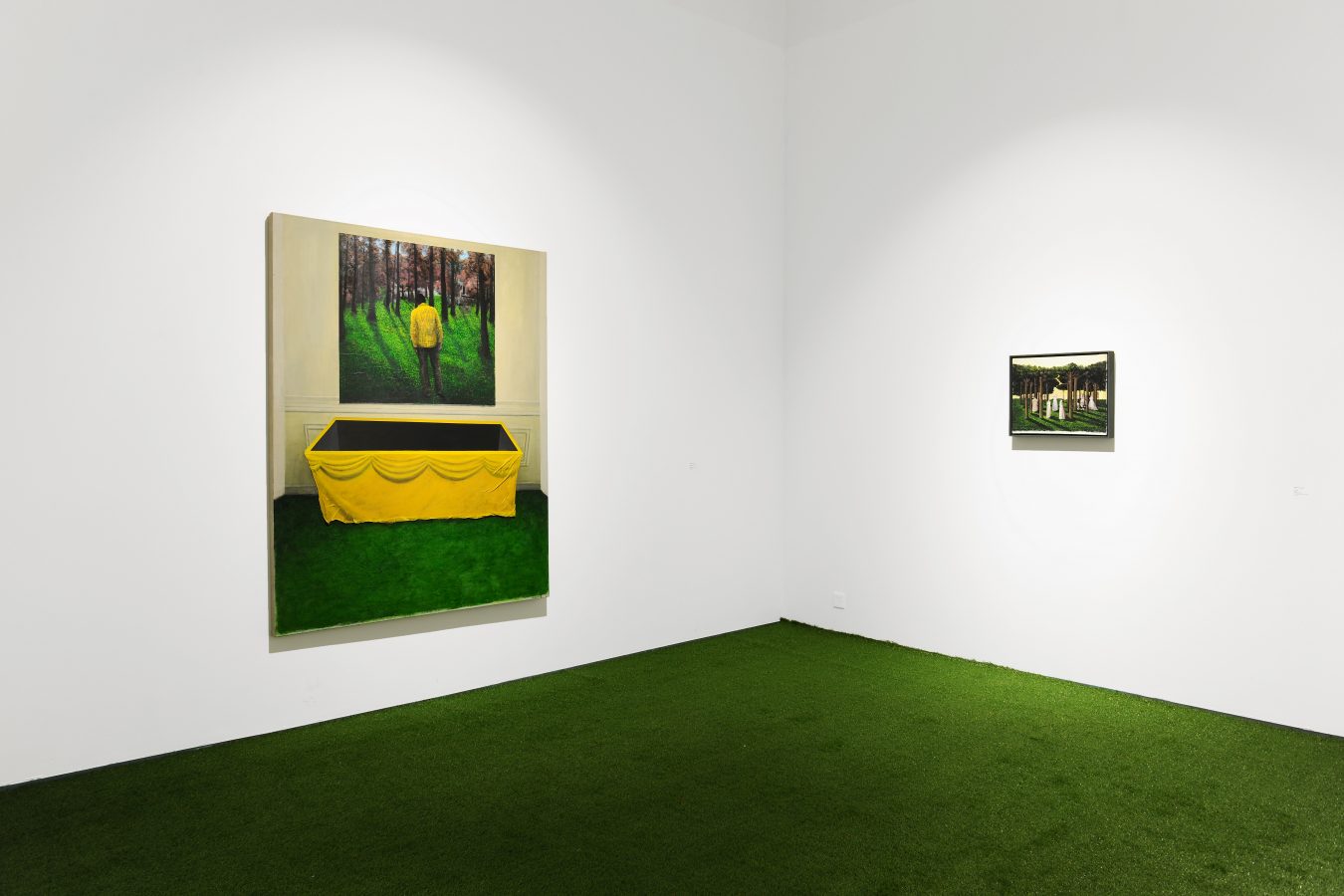 Following the Hive·Becoming III  Tropical Symptoms: Yuan Zeqiang’s Solo Exhibition in 2013, Hive Center for Contemporary Art will feature the artist’s new solo exhibition The Garden of Forking Paths on Nov. 22nd, 2015. The exhibition is curated by Wenfei and will be presented at Hall B.

In the Garden of Forking Paths, Jorge Luis Borges predicts a way of temporal perception: it is no longer homogeneous linear time, but takes on many complicated traits of space. Yuan Zeqiang shows a similar status in his paintings, in which he not only reflects the “fragmentality” of the contemporary perceptive mode, but also juxtaposes images of disparate times according to the logic of montage, like weaving an all-inclusive web of time in the “garden” of a surrealistic style.

In many of Yuan Zeqiang’s works, scenery in a tone of green dominates the picture, which resembles corners of a “garden”. Renaissance gardens rests on the modern rational planning of urban space, so regular geometric shapes and symmetric composition became the basic constructive pattern of the Renaissance gardens and parks. Although he adopts industrial grass powder to add a texture of “turf” to the scenes and constructs a seemingly organized visual appearance, Yuan parodies the Renaissance-style gardens by switching the structural relationship among things so as to subvert the stability of its spatial structure.

In effect, “collage” is an accustomed technique in Yuan Zeqiang’s creation, and he would even “re-create” directly on a photo. The emergence of photography has, as a matter of fact, advanced the application of “collage” in modern artistic creation. A photo is the taker’s “capture” of the real world and by nature a “collage” of time and space. Unlike painting, a photo should rather regarded as a “trace” of something: when a thing fades fatefully away with the passing of time, its two-dimensional copies would be reduced to a kind of “decontextualized” signifiers. As Susan Sontag put it, photography is inherently surrealistic – perhaps just because photography resets space and time in reality by means of “collage”.

In addition, Yuan Zeqiang’s embraces numerous images in a “critical state”, such as passages, entrances and exits, windows and doors. Not only does Yuan show the synchronicity in the existence of things through these images of space, but he also attempts to respond to the classical topics in art history. For instance, in the serious of Fixed Point and Culmination, Yuan suspends the concrete physical images and refers to a certain way of observation and reflection in terms of the principle of perspective in a more abstract manner. And in other works with tunnels or passages as basic spatial structures, Yuan still employs the perspective composition, but, through techniques like collage and transplantation, produces visual effects that violate the spatial logic of perspective, so as to probe into the significance of perspective in a contemporary context with the multi-viewpoint and dynamic approach of montage.