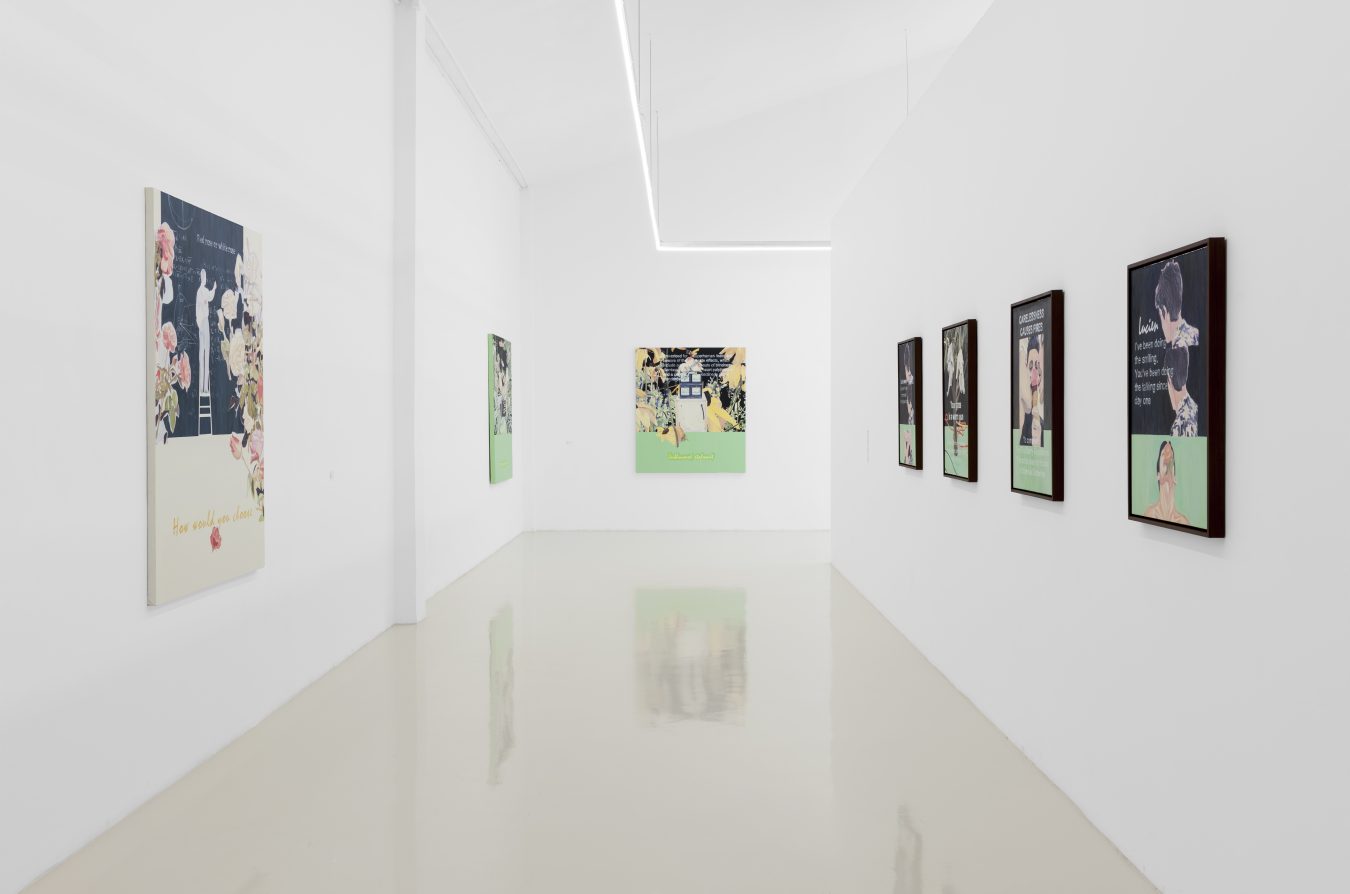 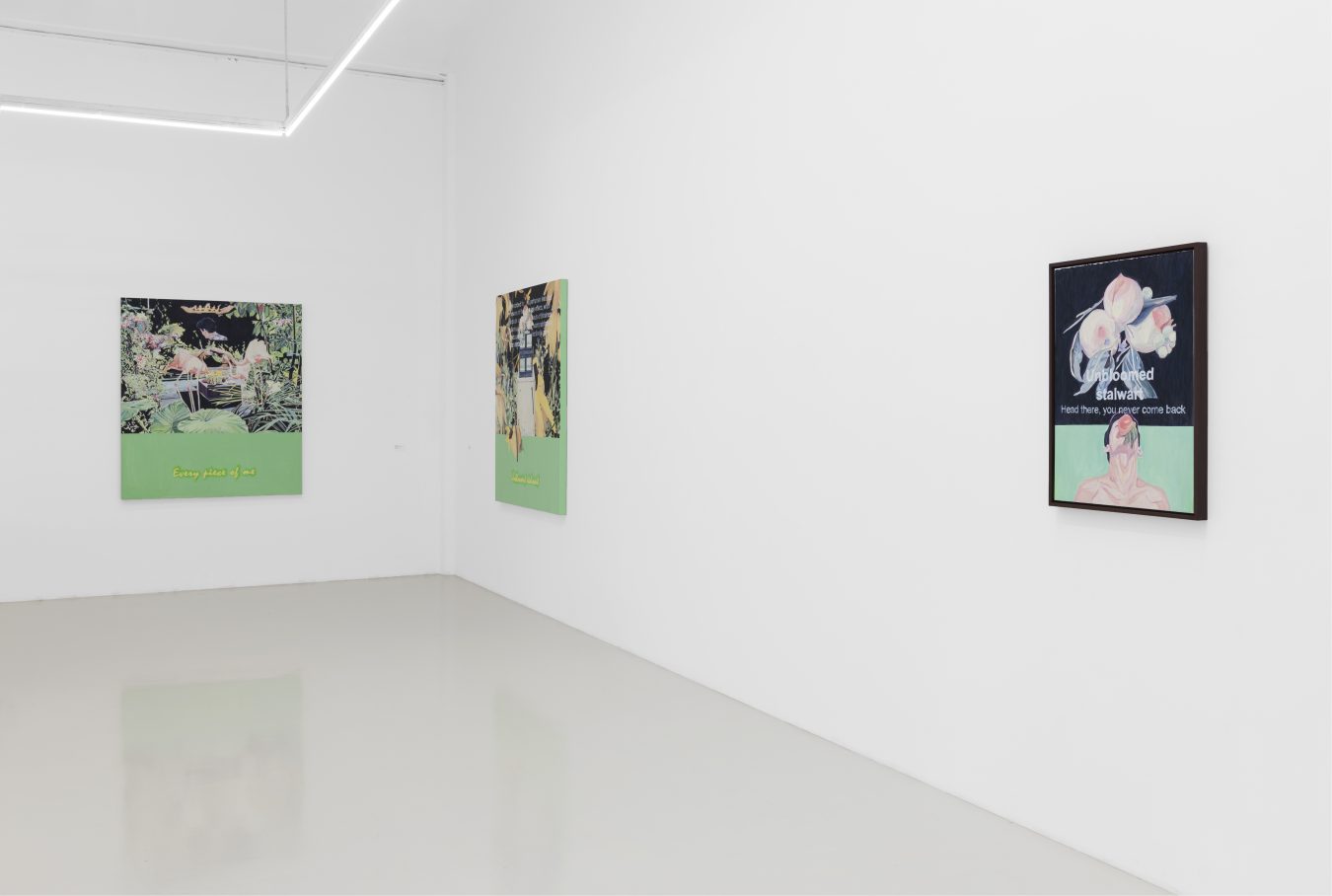 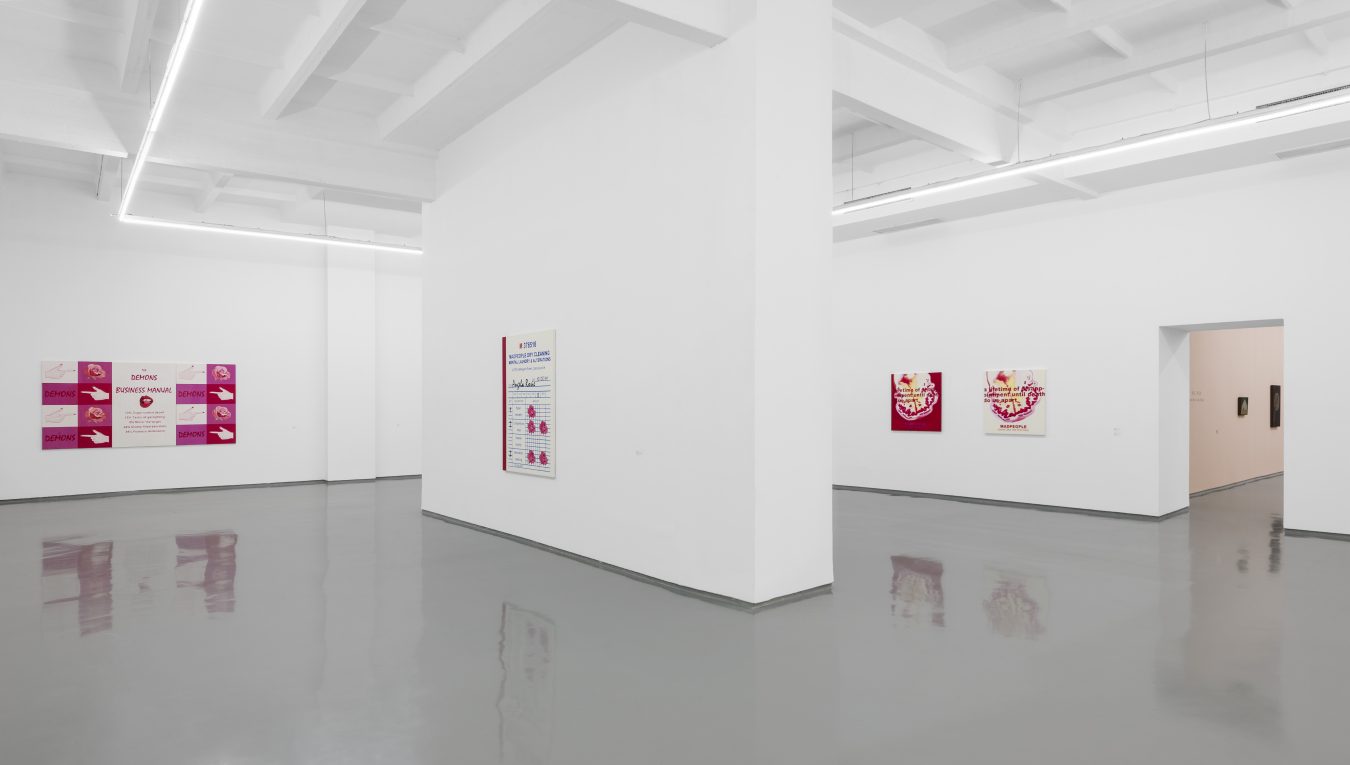 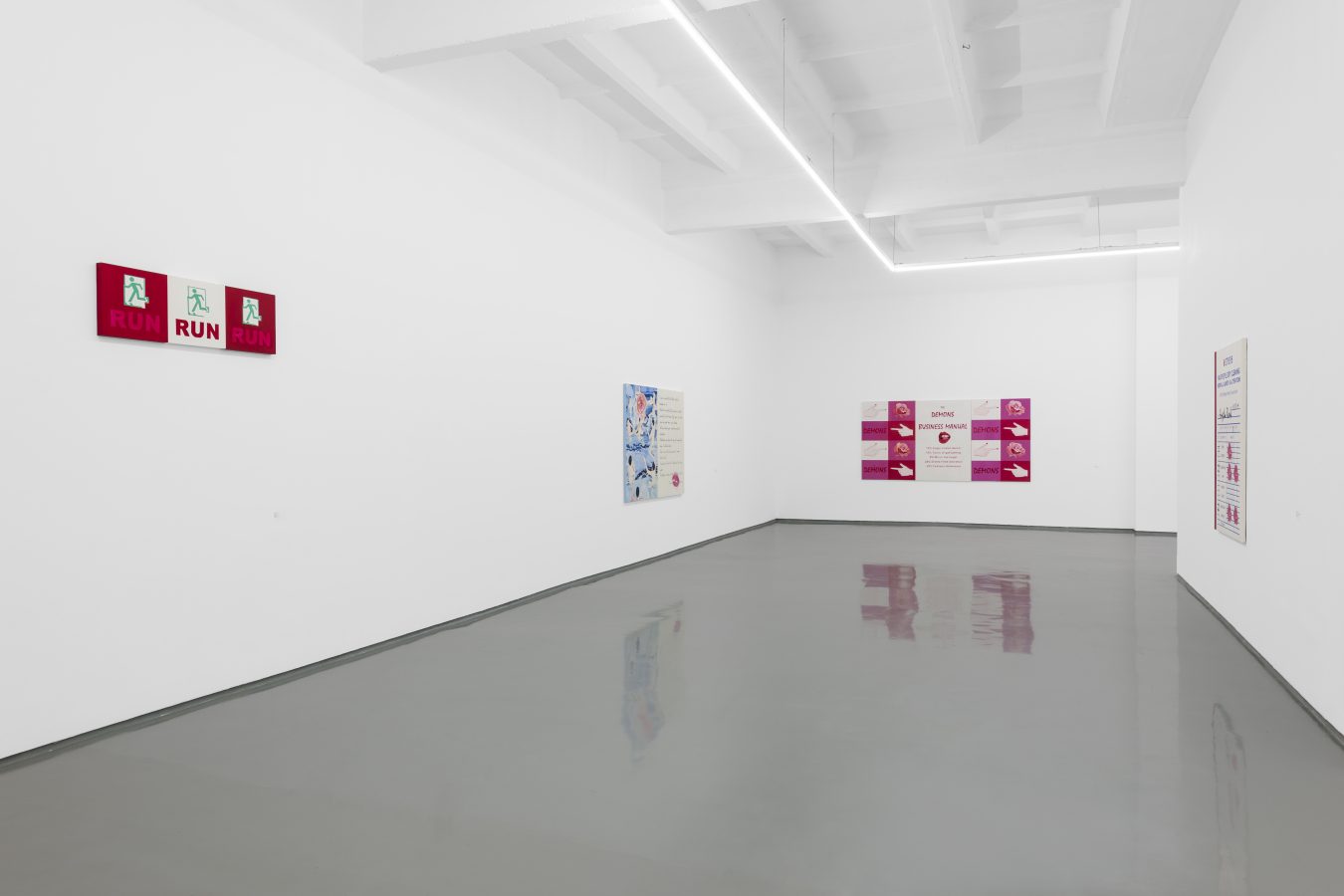 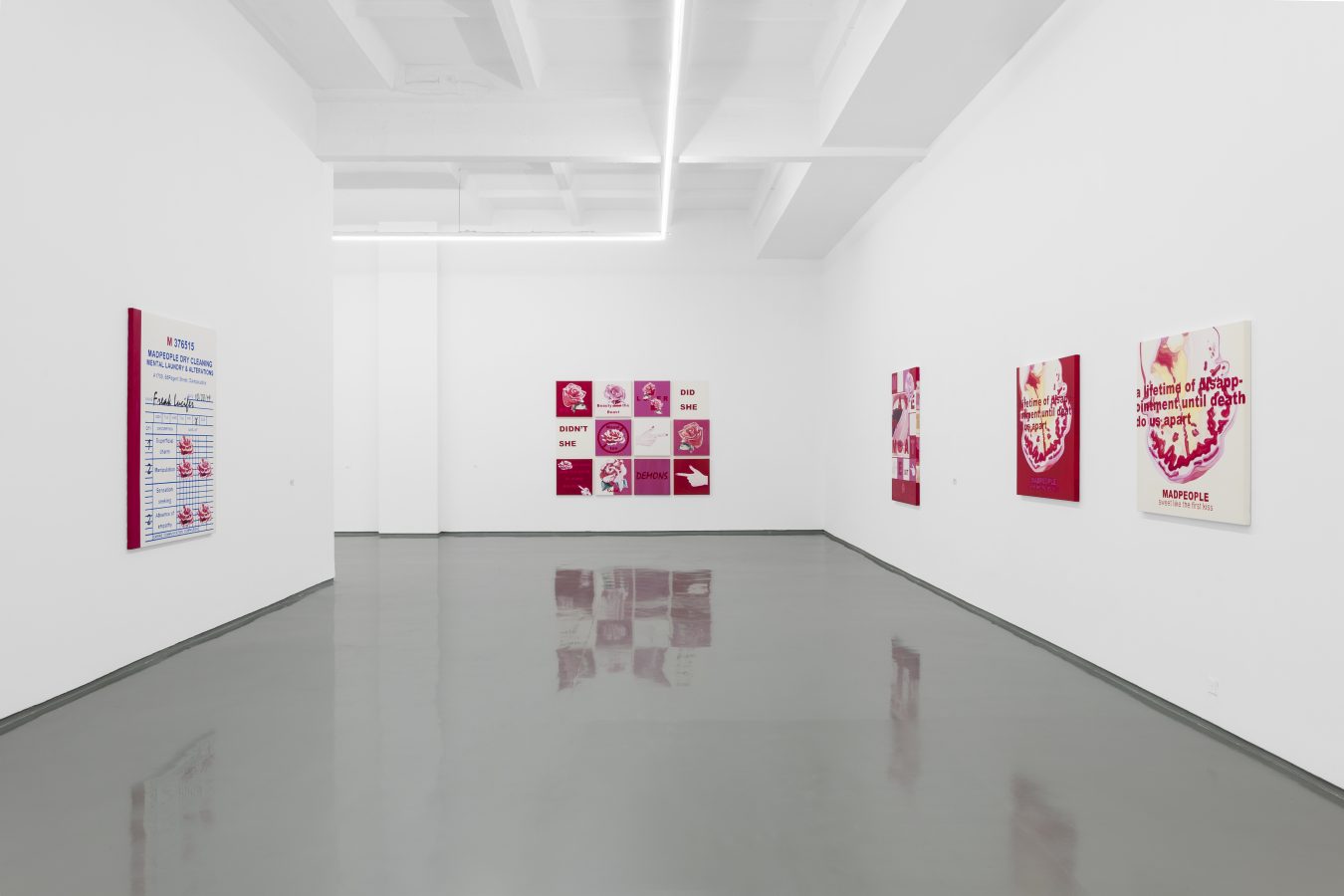 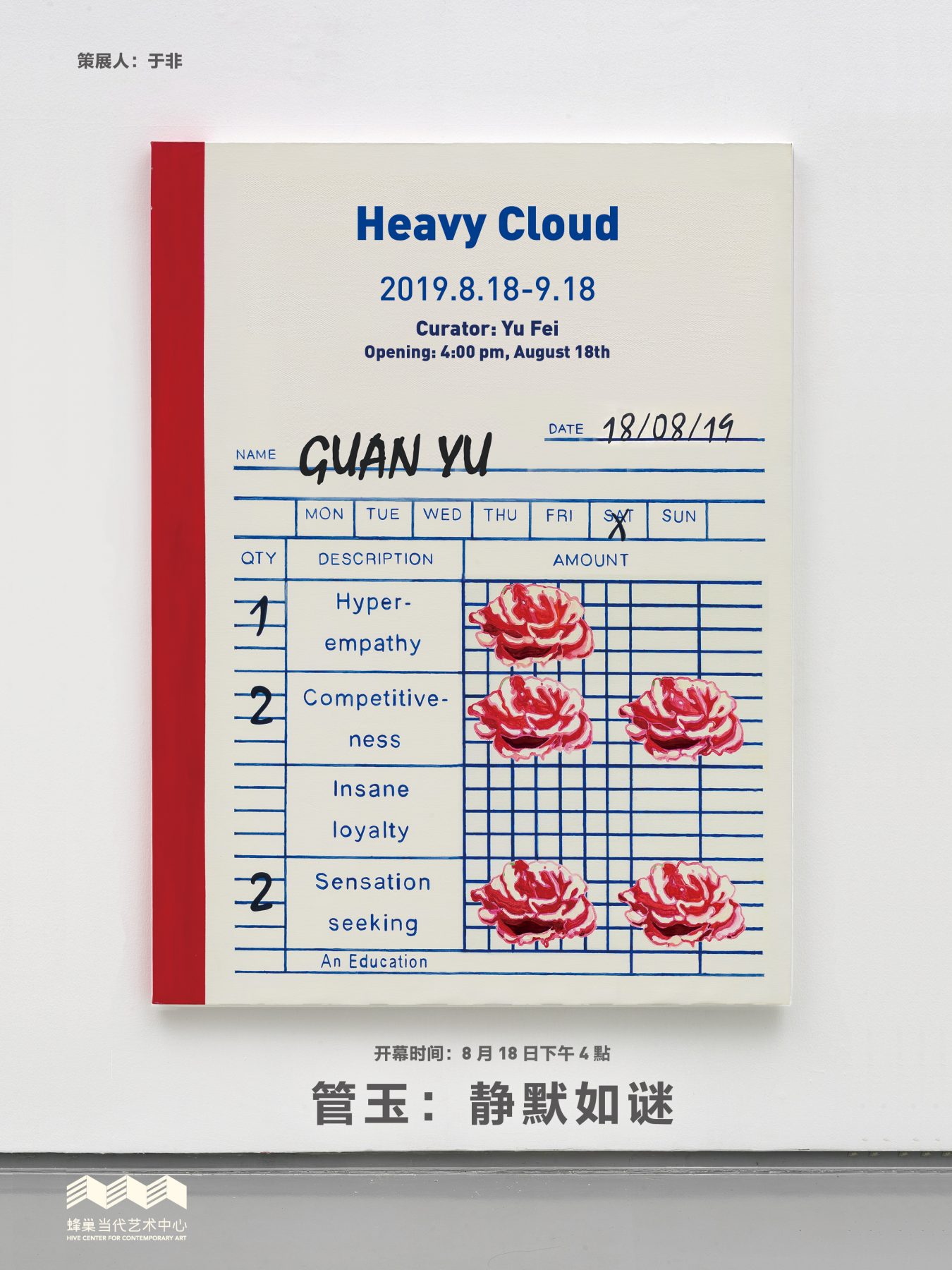 A Flower is not a Flower
Guan Yu

Being towards Death – Red
Guan Yu

Hive Center for Contemporary Art (Beijing) is honored to pronounce that Guan Yu: Heavy Cloud will be presented at Exhibition Hall C D and E from Aug 17 to Sep 19 2019. The exhibition marks the second solo show of artist Guan Yu after her first individual project in Hive-Becoming in 2017. Curated by Yu Fei,  the exhibition will present the artist’s latest works of painting. Guan Yu has built an elaborate maze of words and images in every work. And by studying the intimate relationship, she’s getting close to exploring her own multiple identities.

In her latest series, Guan Yu takes a bold or even aggressive attitude, different from her previous thought-provoking narration. She seems to have turned into a feminist who soberly studies and objectively criticizes the roles that both parties play in their intimate relationship. This seemingly common standpoint, however, is loosened by the many details that constitute every work. By reducing the action of painting to seemingly simple repetition, like the writing of a same letter or the coloring of a same rose, despite the nuance in every stroke, and by a series of accumulation and intensification, Guan Yu creates a turbulent emotional whirlpool that invites the audience to fall together with her.

In comparison, some of Guan Yu’s other pieces seem to bear her personal attributes inherently and have inherited, in a faintly perceptible way, her approach to organizing and integrating words and images. Inclined to narrate, they are either juxtaposed or overlapped, and, in the form of a hand-written private letter or a voice-over in a prose film, they whisper out some utterly personal experiences: hesitation, confusion, uneasiness, ambiguity, aspiration and other such complicated and volatile emotions, all liberated continually along with a first-person perspective. In fact, Guan Yu loves extracting lines from her extensive reading in everyday life, so, like playing games, she replaces her words as she sees fit and marries the replacement with the close-up camera language in the making of a painted, private and also onlooker diary that blends fiction with reality.

Literal translation has never been an approach Guan Yu would take in art, and it’s never been a vector movement from one point to another between her words and images. The two of them tend not to fit snugly into each other, as errors and dislocations, big or small, are usually left intentionally for more possible interpretations. Beneath words and images, the core of Guan Yu’s art is made up of the various facets of human feelings. There are always irreparable cracks and insurmountable barriers between images and words, different languages, and between different people. And what Guan Yu tries to deliver to the unknowing audience happens to be the invisible faults beyond sensual experience in her paintings. While experiencing such faults in personal life, she’d also create new faults in her works.